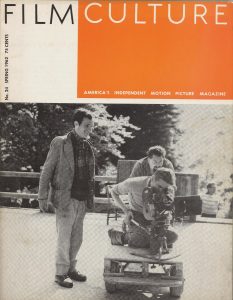 Following on from my first look into the work of Jonas Mekas, I went in search of further references to Film Culture, the New York based magazine founded in 1954 by Jonas and Adolfas Mekas. Film Culture magazine evolved into the primary voice of independent and avant-garde cinema, publishing a total of 79 issues between the years 1955 – 1996.

Most of the magazine’s writers shared a belief in the poetic and ‘painterly possibilities’ of the film medium, defining cinema in lyrical or abstract terms rather than in terms of the narrative form of mainstream cinema.

I discovered twenty three articles from Film Culture magazine available on UbuWeb, a non-profit online resource of all things avant-garde.

The selection includes articles on experimental film, interviews with avant-garde filmmakers, transcripts and reports on symposiums, personal reflections, and a statement by Luis Buñuel.

Selections from Film Culture magazine At: http://www.ubu.com/papers/film_culture.html (Accessed on 6 April 2017)