Techniques can be executed to give the audience something more than information.

We react viscerally to the screen.

The camera functions like the human eye – it sees, and it presents what is put in front of it to the spectator on the other side of the lens.

Why is it that the lens the filmmaker uses, the angle we see the shot from, the rapidity of the edits, affect us in emotionally captivating ways some of the time, but other times leave us disengaged or unactivated?

This can be a confusing concept to filmmakers when first introduced to it.

What does this mean in practice?

All the creative decisions the filmmaker has at their disposal:

Every decision could be screened through the question of whether or not you are injecting a subjective perspective or grounding the scene in an objective point of view.

Whose perspective is it?

The camera begins with a Close Up (CU) on a young woman asleep in bed. It then pans left across the room, revealing another woman sitting smoking a cigarette in a Wide Shot (WS). The camera follows the second character as she stands, walks to the window and opens the curtains. The camera cuts back to the first character in bed as she sits up (CU). Then cuts to the same character looking through a window in the follow scene (CU).

The use of the camera, the position, the lenses, the framing all contribute in subtle and not so subtle ways to the emotional vantage point within the scene.

Fig.2 ‘There Will Be Blood’

From an objective perspective, we observe the action from a distance. The camera may remain separate from the headspace of any of the participants in the scene. This tool can be used creatively to create dynamic, impactful storytelling. 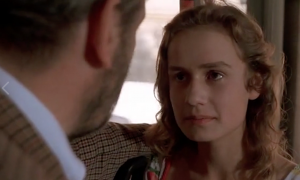 Scenes can begin in an objective perspective. A Medium Shot (MS) of two characters, Suzanne and her father. The camera expresses an emotional distance and puts us as the audience in an observational place. Then a beat happens. The camera frames Suzanne in an over-the-shoulder Close Up (CU). Followed by a reverse angle on her father. The scene has radically changed. We experience the emotions of the scene much more vividly and through the perspective of Suzanne.

The subjective perspective is not a POV shot. These are two completely different things.

The POV shot is useful for conveying emotions. But primarily where it is used in short intervals and juxtaposed with a good objective perspective shot.

For example, in Vertigo, the POV shots function to give you information about what the character would be seeing.

No matter what the scene is, there is a dimension of objective and subjective perspective always at play.

While character perspective is a valid tool and is one way of analysing how the visual choices are working in any given scene, there are always other ways of looking at the same tools and choices that are available to the filmmaker.

Many filmmakers choose to think purely in terms of visually exciting imagery and design their story to facilitate a kind of visual spectacle.

Some filmmakers focus totally on the performances of the actors. The camera work and visual language is there only to facilitate the performance and does little to create perspective on the part of the characters in the scene.

These choices are just as valid as a tool to create emotional perspective.

Each filmmaker in each film establish their own rules for how visual language should work on the audience.

Think of a film as an interior dialect within the larger language of film grammar.

The role of the filmmaker is to determine how those rules will work and how they will interact with the story they are trying to tell.

In an Ozu movie, the visual language will always obey strict rules – the camera will refuse to move, it will remain close to the ground, frames will always seek balance and harmony, a 50mm lens will often be employed. We might call these frames objective and observational. The impact of the moments when Ozu breaks his own rules and moves his camera are all the more intensely felt because of the austerity upon which he has built his cinema on.

If your goal is to reach your audience on an emotional level, you have to think carefully about the tools you have at your disposal and what those tools do beyond creating a frame.

These choices have a psychology to them. And when combined together in unique ways, they have an impact that rises above individual merit.

This site uses Akismet to reduce spam. Learn how your comment data is processed.